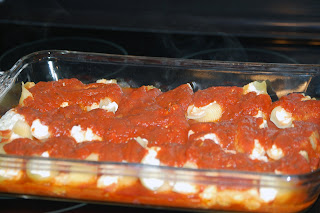 The best thing about this recipe (other than the fact that it tastes really good) is that it makes a lot. The picture only shows half of the recipe. The other half of the shells are in my freezer, waiting for their turn to become dinner. 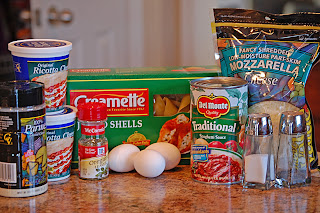 1 box jumbo shells
4 cups (2 lbs) ricotta cheese
2 cups (8 oz) shredded mozzarella
3/4 cup grated Parmesan cheese
3 eggs
3/4 tsp. oregano
1/2 tsp. salt
1/4 tsp. pepper
2-3 jars or cans of spaghetti sauce (I always use the cheap Hunt’s brand sauce for this. It works fine.)
Cook the shells according to the package directions. Drain them and cool in a single layer on wax paper or foil. Meanwhile, combine the cheeses, eggs, and seasonings. Fill each shell with 1 1/2 Tbs. of the cheese mixture.
Spread a thin layer of sauce on the bottom of the pan. Place the shells in the pan in a single layer. Cover with remaining sauce. Bake covered at 350 degrees for about 45 minutes or until hot and bubbly.
I froze the extra shells to use later in a single layer and then placed them in a ziplock bag. To use them, I’ll just assemble the shells and sauce in the pan and bake them a bit longer. 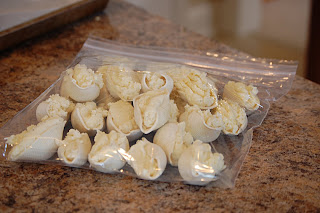