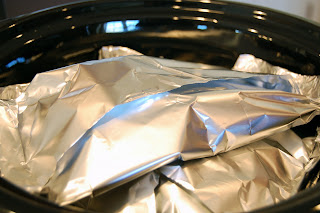 Until recently, I’d never thought of using foil packets to cook food in the crockpot and I never would have thought to cook fish in the crockpot. But a few months ago I found A Year of Crockpotting.

That blog changed the way I cook in the crockpot. I’ve learned all kinds of handy crockpot tricks and have even been able to adapt her ideas to accomodate my own recipes (see Hashbrown Casserole)

This recipe for Tilapia comes from A Year of Crockpotting. It was a huge hit with everyone in my family, even the ones who don’t normally like fish. The sauce is flavorful. Cooking the fish in the crockpot didn’t give the house a fishy smell – another bonus. 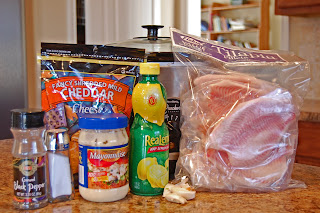 3-4 Tilapia fillets or other white fish (I made 6 fillets)
1/4 cup mayonnaise
1/2 cup shredded cheese (I used cheddar, but parmesan would be really good)
the juice of two lemons (I used 5 Tbs. of lemon juice)
4 cloves garlic, minced
salt and pepper

I didn’t really measure the mayo or cheese. I knew I needed a bit more since I was making 6 fillets, so I just eye-balled it. Stir the sauce together (all ingredients except the fish). I decided not to thaw out the frozen fillets. It just seemed like an easy step to skip and it worked out fine.

Put the sauce on both sides of the fillet. Then wrap into a foil packet. Place all the packets in the crockpot, stacking them on top of each other. I was surprised that they took up so much space in the crock. I thought I might have room to wrap potatoes and put them on the bottom of the crock to cook at the same time, but there wouldn’t have been room. Maybe if you’re making less fish. If you try that trick, let me know if it works! 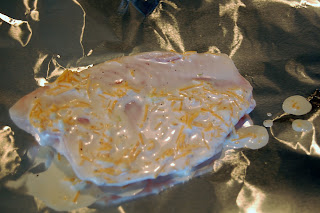 Cook on low for 3-4 hours. I started mine on high for about 30 minutes since I started with frozen fish, but I don’t know that I needed to do that. The fish should flake easily with a fork when it’s done. 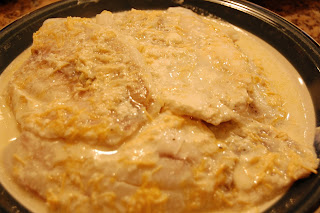