My extended family has been vacationing together for a number of years now.  Sometimes we do Disney World, sometimes the beach, but we always use this method for bringing our food along.

I’ve updated this post, which originally was published in 2009.  The photos are not great quality.  Every year I think I should try for better pictures, but it’s vacation and I forget in the midst of all the fun. 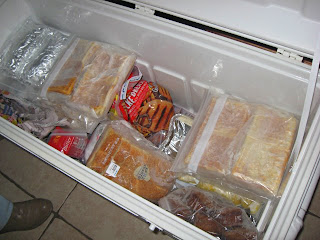 Subtitle: How My Mom Transported 5 Dinners for 13 People from Indiana to Florida in August without Giving Anyone Food Poisoning

What? Not eat out on vacation? Who wants to cook while they’re vacationing? Probably nobody, but with a little planning making your own food on vacation can be easy and will save you hundreds of dollars. (It also helps if you have a mom who does all the work. More on that in a minute.)

I’m not going to talk about using crockpots, hotpots, toasters and coffee pots in a hotel room, although I have done that before. This info will be most useful for those of you who rent a house or cabin or if you camp. These are also great ideas if you are doing a “staycation” and want to eat at home, but keep it simple and good.

My parents packed a very large cooler about 4:30am with the food, which was already frozen solid. They bought dry ice that morning. There were guidelines on the package of dry ice that said to use something like 12 lbs. for 48 hours. Because of the heat, they decided to use 20-25 lbs. of dry ice. They packed it on top of the food because cold descends. The dry ice was also wrapped in newspaper to better insulate. All the ice was gone when the cooler was opened, but the food was still frozen.

You need to know that my parents left Indiana at 4:30am on one day. The cooler was not opened until about 4:30pm the next day! That is a long time to keep food frozen in August. The cooler just hung out in the back of their van while they drove and then enjoyed a half day at Epcot. We were a bit nervous before opening it, fearing it had all rotted. But it worked!

Tip: If you can’t find dry ice, check with a local welder.  They usually have plenty and will sell it to you, although it is a good idea to check with them ahead of time to be sure they will have it for you.

Update 2016: My parents packed the cooler with the frozen food and 60 pounds of dry ice on Thursday around noon.  We didn’t unload the cooler until Saturday around noon.  Everything was still frozen and there were still pieces of dry ice.  Do be careful unloading if you have pieces of dry ice remaining.  It will burn your skin if you touch it. We used tongs to remove the dry ice, and towels to handle frozen metal pans.

I’m not sure why the amount of dry ice has increased so much since we started this. We’ve never had anything thaw before.  Maybe we’ve just gotten nervous about it?

There are lots of different foods you could make that could be assembly only and frozen to reduce your cooking and clean up time on vacation. These are some of the foods we made. Click the links for recipes. I took these photos with my old point-and-shoot camera. 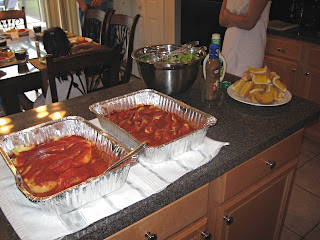 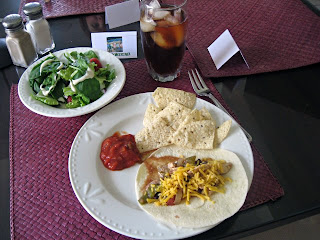 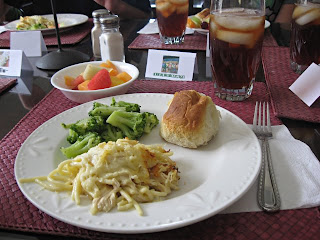 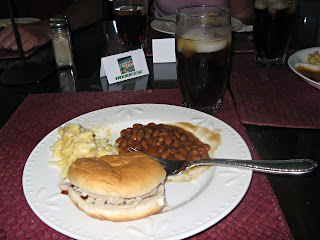 A few other tips

Make good use of foil pans and crockpot liners. They will greatly speed up the cleanup process.

We used a grocery shopping service called We Go Shop in Orlando. That saved us spending our vacation time buying perishables that couldn’t be frozen.

Update 2016: We’ve used We Go Shop a number of times. They are wonderful to work with.  I highly recommend them.

Mom also made and froze a cake, cookies, waffles, banana bread. Obviously, there was some work in planning and preparing the food, but it really paid off in the end.

You’re going to love this recipe from Eat at Home writer, Kim!  She makes use of the grill, but this will work in the oven too.

I know many of us are caught up in back-to-school and starting to have a little Fall fever (is that a thing?) If the pumpkin posts that have started popping up everywhere are any indication, then yes, Fall fever definitely exists. However, in my neck of the woods, it’s still 90 degrees, and I’m still grilling every chance I get. With the craziness of 3 kids, school, sports, etc., I have been looking for easy recipes that do not require a lot of prep or cleanup. These chicken and foil packets fit the bill. I love that I can cook the meat and vegetables at the same time, and just add some fruit as a side to have a complete meal. Also, when everything is bundled up in a neat little foil packet, clean up is breeze! Start by prepping your meat and veggies (which can be done ahead of time). I used chicken, potatoes, peppers, onions, carrots, grape tomatoes, and zucchini. This recipe is versatile, and you can add just about anything you like. Just remember to slice potatoes thin and cut your meat into bite size pieces so that it cooks fast, and veggies that cook quickly can be left in bigger chunks (like zucchini…I do not like it to get too mushy, so I sliced it into thick rounds), this way, everything is done at the same time. Place your veggies on a sprayed piece of foil, add your chicken and any spices you like. I like to add a little bit of butter on top as well. Gather your foil up around the meat and vegetables, pinch to seal at the top, and throw them on the grill (or in the oven on a baking sheet!) for about 25 minutes….and boom! Dinner is basically done! Chicken and vegetables cooked together in a neat and tidy foil packet!
Author: KimM

Kim M. is a contributing writer for Eat at Home, as well as the mom behind the mayhem at Makin’ it Mo’Betta. There you will find kid-friendly recipes, quick and easy meals, and many, many more desserts!

This recipe from Kim looks amazing! This is the kind of thing my family would devour at the beach!

I love a Chex Mix for several reasons…I can make a huge batch at once, there are tons of different flavor variations, it’s great to have on hand for hungry kids that are constantly in and out of the kitchen, and it’s super easy to throw in a ziploc bag and carry with you on long car trips or to the beach. However, we’ve been experiencing quite the heat wave this week, so turning on my oven, and opening it every so often to stir up a batch of chex mix was not appealing to me. Crock-Pot to the rescue!! Yes, the slow cooker comes in handy all year long! I couldn’t quite decide which direction I wanted to go with this mix…did I want sweet? Did I want spicy? I kind of wanted both, so that’s what I did. A sweet and salty combo with just a little bit of heat.

You could easily increase the heat on this, but I knew my kids wouldn’t go for it, so I kept it mild. It actually sneaks up on you – the first few bites taste sweet and salty, and then you get a little kick from the cayenne. And yes, those are little Minion cheese crackers. According to my 7-year-old, the Minions taste better than the traditional square crackers! As with almost all chex mixes, you can add whatever you like or have on hand. A sweet and salty combination with just a little heat, that comes together easily in your slow cooker.
Course: Snack
Author: Kim M

Just beware…it’s hard to stay out of!

Kim M. is a contributing writer for Eat at Home, as well as the mom behind the mayhem at Makin’ it Mo’Betta. There you will find kid-friendly recipes, quick and easy meals, and many more desserts! I shared this post of 7 Disney World Recipes to Make at Home a while back.  (Look how little my baby is!)  This photo was taken in Minnie’s House in the old Tune Town section of Magic Kingdom.  Can you even tour Minnie and Mickey’s houses anymore?  I’ve lost track of what happened to them when they started the Fantasyland expansion.

Since this post in May of last year, I’ve added two other taste of Disney recipes.

Peanut Butter and Jelly Milkshakes from 50s Prime Time Cafe are a new favorite for us.  Yum!

If you’re dreaming of a trip to WDW, The Magic for Less can help you get there and save money.  Here’s info on one of the deals going on right now:

Save up to 30% on Walt Disney World Resort hotel stays, most nights from 8/15/13 to 9/28/13. Disney’s Dining Plans and Tickets can be added to this offer making it a package. Packages for this offer can be combined with The Magic for Less Travel’s exclusive Pixie Dust, Deluxe Pixie Dust Pack and Grand Pixie Dust Pack offers. Must be booked by07/31/13. You can see the details at The Magic for Less Specials. To be notified when new Disney Parks discounts are released, sign up for TheMouseForLess Discounts Newsletter .

Are you planning a Disney trip or have you just gotten back?  I’d love to hear about it!  Leave me a comment.  I can never get enough of Disney!

Summer is here and so are vacations!

We’re taking off for Disney World this week, so I thought I’d share 7 of my favorite Disney recipes to make at home.  Some of them are adapted from actual Disney recipes and some are inspired by foods Disney serves.  Either way, they are all delicious! Cottage Pie from Rose and Crown in EPCOT